A dignified briefcase loved by the owner of a shoeshine shop that has reached the top not once, but twice.

Go Ishimi, Shoeshine and Owner of The Way Things Go

It holds all the brushes and creams we use nicely,
so it’s a favourite of not just myself, but our entire staff.

Osakan shoeshine shop “The Way Things Go” has two Japan champion shoe shiners on its roster: Naoki Terashima, who won this year, and his teacher Go Ishimi, the owner of The Way Things Go and the previous year’s winner. Mr Ishimi’s attention to detail applies not only to his business, but also to the original brushes and uniforms he has developed, as well his own made-to-order suits. His constant companion through every step of his work is this briefcase from Glenroyal. Here we speak with Mr Ishimi about what he likes about the briefcase, and how he chooses the items he uses.

Repair and care are inseparable.

━Tell us about the opening of the Tokyo branch of The Way Things Go.

Around two years ago, a certain Mr Nakadera who heads the bespoke tailor “Batak” came to my shop in Osaka and then later introduced me to Mr Nakagawa, the president of Union Works. To put it bluntly, leather shoes can be worn without any maintenance, but if they get a hole in them they absolutely must be repaired. That’s why I had always thought that, if I were going to keep my shoeshine business going forever, it would be best to team up with a repair shop. So, I started visiting Mr Nakagawa regularly, and just around the one year after we met, I made the offer to have my shop take charge of running “The Upper Gallery” above the Ginza branch of Union Works. He agreed readily, and we decided to kick things off by holding a shoeshine event.

The thing is, while the event itself was a huge success, we found ourselves overstocked. We tried to secure a storage room, but the building was so popular that we couldn’t be sure when any space would open. Once Mr Nakagawa learned this, he told us we could have his Shibuya store, and so it was decided that we would reopen Union Works’ first store as The Way Things Go x Union Works. I and my staff then spent a year going back and forth between Osaka and Tokyo to train and really buckle down on learning the art of shoe repair before we finally opened the Tokyo branch for business this January. The whole experience has been a great honour, particularly since Union Works has apparently never once co-operated with another company in this manner in their 24-year history. 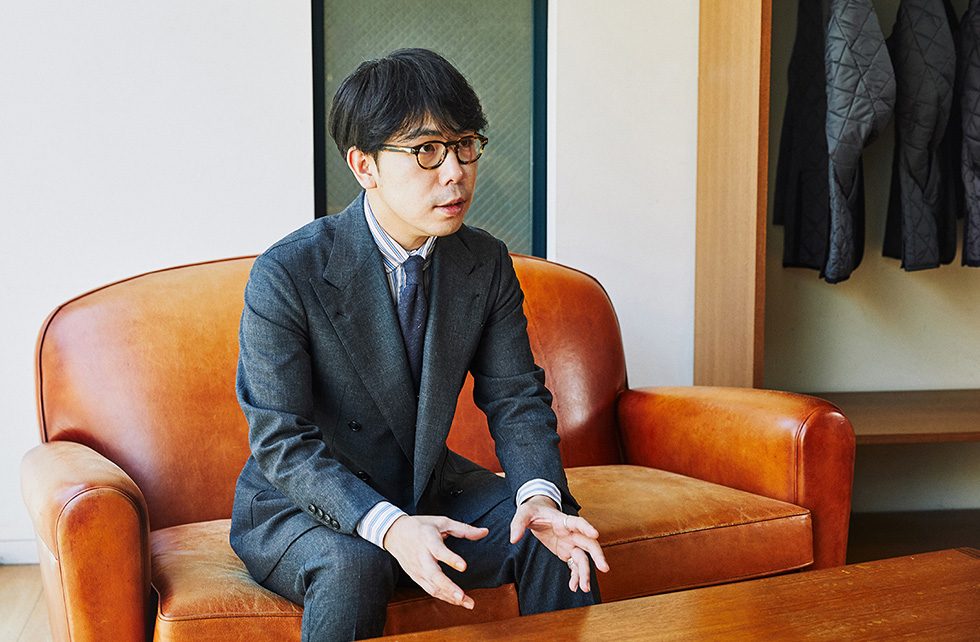 I want to work on all kinds of projects with team at The Way Things Go.

━What do you see in the future for your business?

It would be ideal if I could work about half-and-half between Tokyo and Osaka. Aside from my shoeshine business, I’m also doing a brush brand known as “KINKOU” at the moment. The bespoke suits my staff wear as uniforms have also been extremely well-received, so in time I would like to do more of a real business project in that direction as well.

For example, I’ve thought maybe the best course of action would be to spin off these endeavours as separate companies, and then have the members of my current team act as the heads of these businesses. That said, we are extremely busy right now due to the massive influx of customers since Terashima just won the championship. Lately I joke around about how I’m secretly planning to open a Kansai-style takoyaki shop in Tokyo (laughs). My team even played along with it once, and everyone said our takoyaki tasted better than the best shops in Kansai. 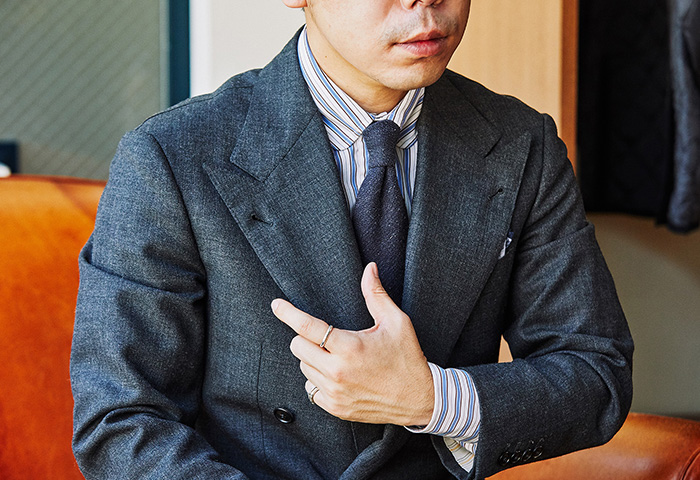 An affinity for painstaking craftsmanship that doesn't spare any time or effort.

━What are some of your main criteria when choosing products?

I’ve been wearing jackets ever since I started this business, and in general I spend 365 days a year wearing either a blazer with denim or in a suit. I stopped buying off-the-rack clothes around two years ago, and now all of my jackets and suits made-to-order. One thing I pay attention to regardless of the item is particularity about the details.

The jacket I’m wearing today, for example, is made with resilient, excellently-woven fabric from Standeven in England. I had it tailored entirely with haircloth, so it really stands out and is quite attractive. I like things like this that are made without any regard for the time or effort it takes. The same goes for any leather goods I own as well. I put a lot of thought into details like the quality of the leather itself, how thin the seams are, what sort of impression the item will make with others when I’m holding it. I tend to prefer straightforward designs in tones of grey, navy, or black. 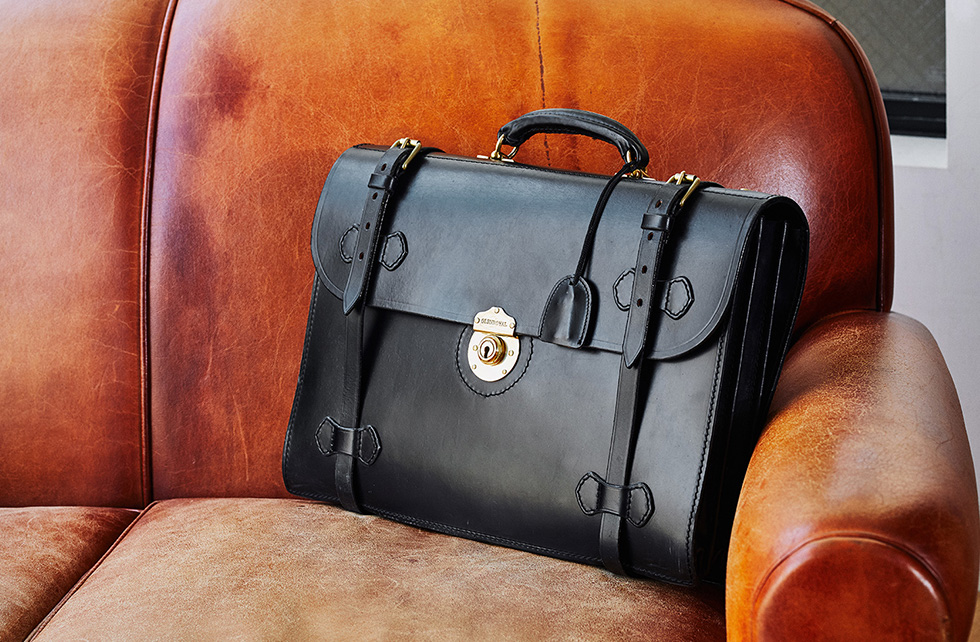 An abundance of products that are simple yet elegant.

━What are your thoughts on products from the UK?

More than a few of our clients that come to get their shoes shined wear products of the highest class like bespoke suits and shoes that cost over one million yen. Many of said clients have a taste for items from the UK, and this is where pretty much all of the shoes they bring in come from, actually.

My beloved folio case for my phone is from an English brand by the name of “Rutherfords” and is made of pure English bridle leather stitched with Irish linen thread. Much as you see with Glenroyal, goods from the UK have designs that are simple yet not overly casual, as well as a refinement that brings a sense of dignity to them. I think that’s why they are so favoured by people who love good quality products.

A "game time" bag loved by everyone on staff

━Why did you choose this classic briefcase from the collection?

It has a good wedge that allows to hold our original brushes and creams, but I think the biggest reason is that it makes us look good (laughs). If a craftsman pulled his tools of the trade out of a bag like this it’d look cool, right?

Back when I still made shoe shining house calls, I used a custom-made “Globetrotter” tool case, but once it broke I came to the realization that I didn’t need anything so overstated.

So, I put my Globetrotter on display in the Osaka store and now use this Glenroyal briefcase. While it may not be able to handle week-long events, it can carry everything I need for outings that last only one or two days. I let my staff take it with them when they go out to events, too, so now it’s become all of our “game time” bag for when we need to go out and do our best. Thanks to the belts it can shut nice and tight no matter how much we put in it. 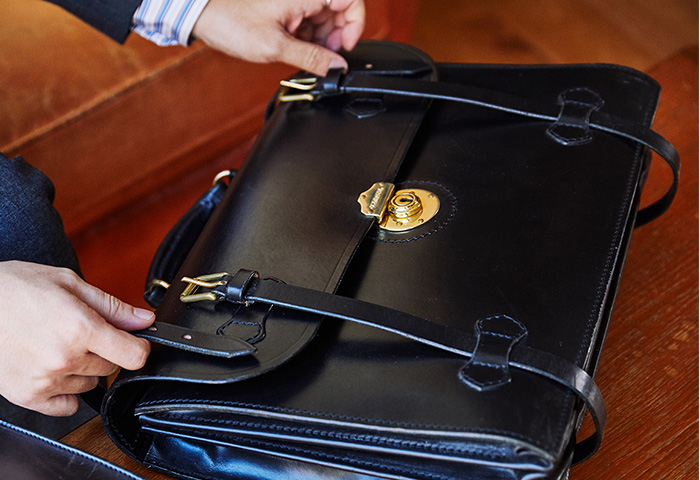 Leather that only looks cooler and more flavourful as it gets scuffed.

━What sort of maintenance do you do on your briefcase?

If you look closely, you can see that the briefcase is actually pretty scratched up, but that only adds to the character of the bridle leather and creates an air of something that been used regularly for a long time. One of my favourite things about this briefcase is how rough use doesn’t make it look dirty or shabby, but actually more cool. The way it gains flavour over time is even classier than you get with regular calf leather. I’m sure some out there prefer to use their briefcases carefully and keep them nice, but I personally am more the type to not worry about all that and instead just enjoy how the bag ages with use. 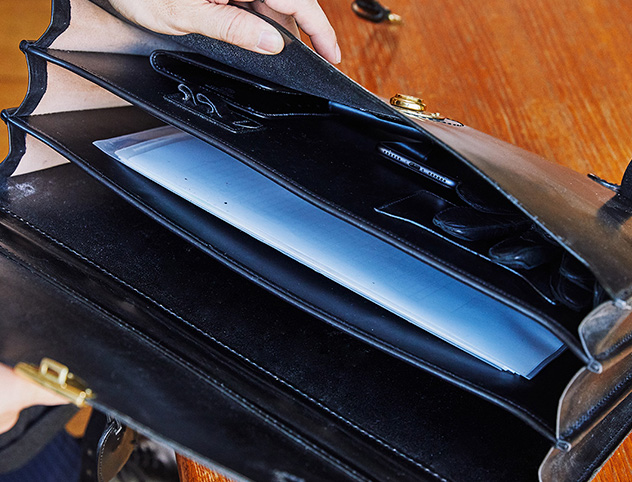 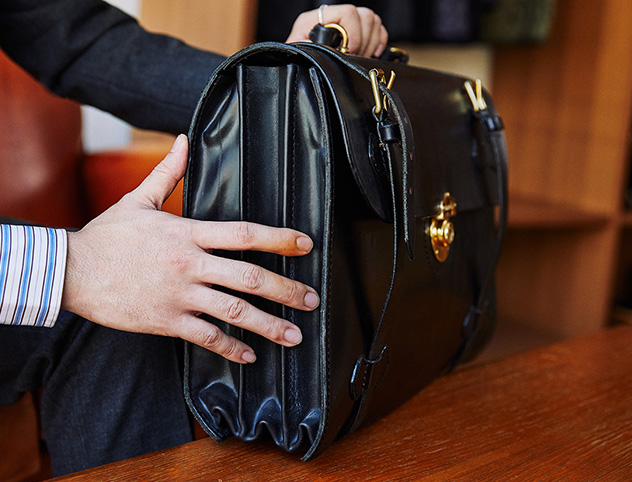 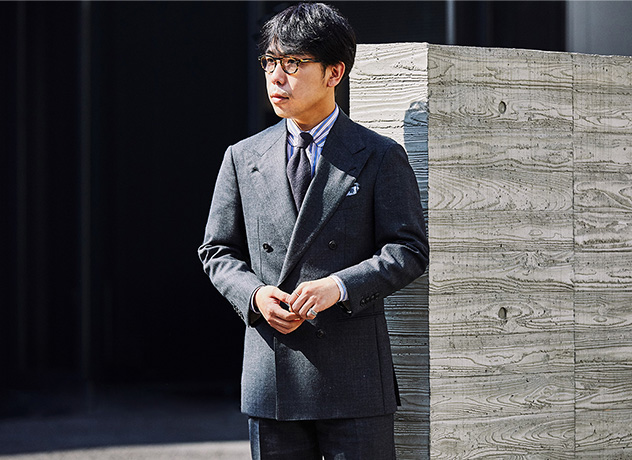 Go Ishimi
Shoeshine and Owner of The Way Things Go

Go Ishimi was born in 1982. He fell in love with the shoe shining trade after leaving his previous company. Mr Ishimi started by shining shoes on the street, and then after training, launched a house call shoe shining service in 2012. He then in 2015 opened his shoeshine parlour “The Way Things Go” in the Funaba Building in Osaka. He won the “Japanese Shoe shining Tournament” held at the Ginza Mikoshi in January 2018. In January 2019, Mr Ishimi opened the first Tokyo branch of his business in Shibuya.
https://www.twtgshoeshine.com

Things that change and those unchanging. Masterpieces the creative director loves. 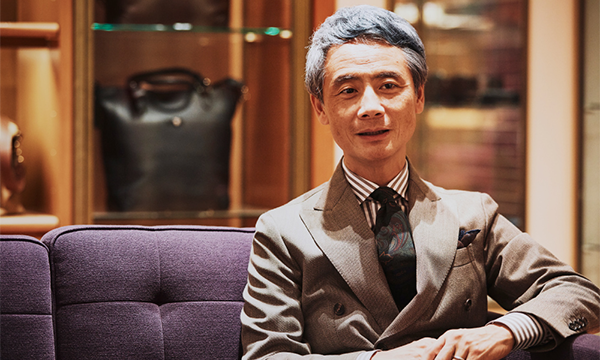 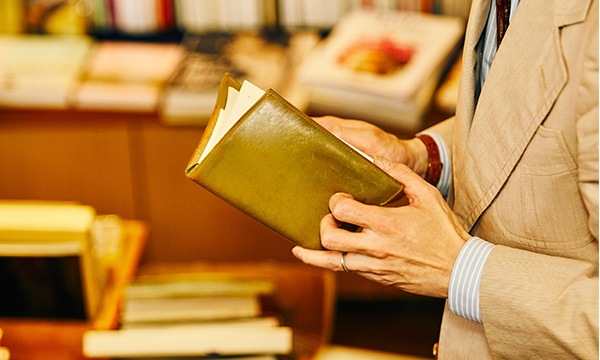